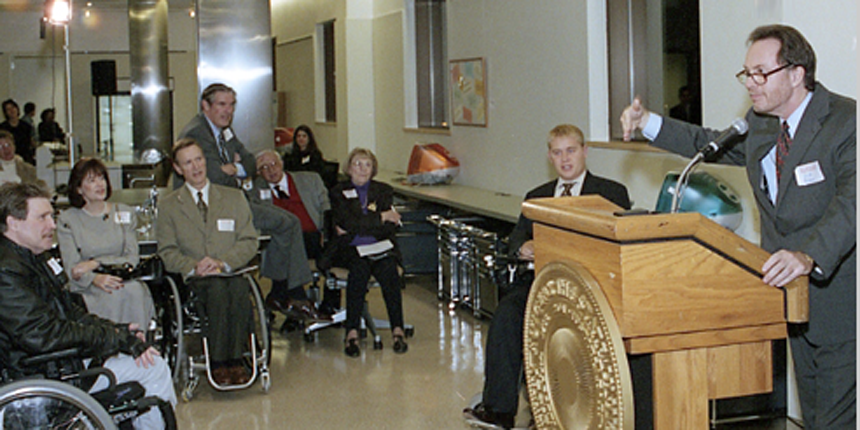 Determined to alleviate human suffering, in 1997 Rutgers, The State University of New Jersey, established a world-class neuroscience center. The first-step in fulfilling that commitment was the recruitment of Dr. Wise Young to design and lead a unique program built on a problem-solving, collaborative approach to neuroscience. Dr. Young is recognized as one of the world’s outstanding neuroscientists and a leader in the field of spinal cord Injury.

The Center applied for and received a $2.1 million grant from the W. M. Keck Foundation, the largest grant given to an East Coast institution, resulting in the name: W. M. Keck Center for Collaborative Neuroscience. A series of Wall Street supported fundraisers under the banner ‘CURE’ broke existing records for fundraising in a single night. In 1998, a ‘Wall-Breaking Ceremony’ featuring paralyzed actor and activist Christopher Reeve marked the beginning of construction.

Eight highly recognized faculty members with a variety of expertise were recruited to facilitate the work of the Center. A team of skilled technicians facilitates the research.

Building the foundations for human clinical trials, the Center launched ChinaSCINet and the Hong Kong SCI Fund. In 2005 the first meeting of International Spinal Cord Injury Treatments and Trials (ISCITT) brought together 300 leading spinal cord injury scientists and clinicians from around the world, including the leading spinal cord injury institutions and researchers throughout Hong Kong and China.

Under the banner “The Spinal Cord Injury Project”, the Center organized rallies in Washington, D.C. to lobby Congress, and formed “Quest for the Cure”, a coalition of organizations and community people to pass legislation funding spinal cord injury research and the New Jersey Stem Cell Research Law which permitted all types of stem cell research in the state. In 2007, the Stem Cell Research Center, contiguous with the W. M. Keck Center, was dedicated by Acting Governor Richard Codey.

A commitment to the community of people with spinal cord injuries and their families resulted in the founding of the CareCure.org (originally SpineWire), the largest interactive website in the world, and the First Friday Open House Programs. These provide the opportunity for people around the world to learn the latest information about research and clinical trials and ask questions to experts and to other members of the community.